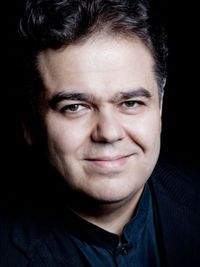 Born in St Petersburg in 1972, Arcadi Volodos originally trained as a singer and conductor, going on to study piano in Moscow, Paris and Madrid. His Carnegie Hall debut recital in 1998 (featuring music by Scriabin, Liszt, Schumann and Rachmaninov) brought him to widespread international attention and was released on Sony the following year, winning a Gramophone Award and marking the beginning of a long-standing relationship with the label; subsequent releases have included an all-Schubert album (‘irrefutable proof of Volodos’s genius and versatility’ - Gramophone Guide), an multi-award-winning disc of Mompou (‘the purest pianism’ - BBC Music Magazine), and a Brahms recital which was shortlisted for a Gramophone Award in 2018 and described by International Piano as ‘wonderfully cultured, full of insight and beautifully precise phrasing’. Though recitals are his main focus, Volodos’s discography also includes Rachmaninov and Tchaikovsky concertos with the Berliner Philharmoniker.