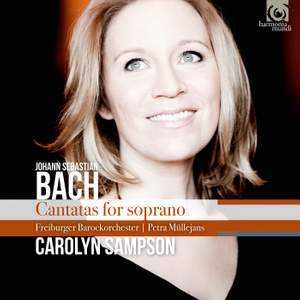 For biographer Philipp Spitta, Bach's period as organist and later Konzertmeister to the Duke of Weimar (1708-17) was the time of his ‘early mastery’. Nowhere is this more evident than in the small but highly distinguished body of cantatas he wrote there, whether for the court chapel – the Himmelsburg or ‘Castle of Heaven’ – or for some clearly very joyful wedding (BWV202). From the ravishing duets for soprano and oboe of the latter to the penitential strains of BWV199, the radiant voice of Carolyn Sampson and the virtuosos of the Freiburger Barockorchester do full justice to Bach's inventiveness.

Soprano Carolyn Sampson has been proclaimed "the best British early music soprano by some distance" by the editors of Gramophone. A native of Bedford, she studied voice with Richard Smart at the University of Birmingham, and made her debut with the English National Opera in a production of Monteverdi's L'incoronazione di Poppea and continues to appear with this company with regularity in addition to appearances at the Paris Opera. The vast majority of Sampson's singing has been heard in concert engagements with period ensembles, and by 2006 she had appeared with most of the best-known groups of this sort, but especially the King's Consort, Collegium Vocale, and Ex Cathedra. Sampson has recorded extensively for the Hyperion, BIS, Harmonia Mundi, and Deux-elles labels.

Here are performances...to treasure for a lifetime...Sampson conveys a beguiling innocence, enlivening Bach's vernal masterpiece with affective ornaments, lightly articulated declamation and a carefully controlled vibrato. Tempos are justly chosen and the appropriately resonant importance given to the basso continuo provides icing on this most delicious of cakes.

Sampson is arguably the most experienced, assured and wide-ranging of current Bach sopranos. Sensitivity to the evolving line and projection of text, both of which she manages with warmth and dark-hued reflection, forms a consistent part of her delicate armoury...The resonant and authoritative Freiburgers encapsulate the profound remorse of the sinner [in BWV199]...This is really worth waiting for.

It’s a tribute to [Sampson's] linguistic as well as bright-voiced musical talents that she is the chosen soloist with the Freiburg Baroque Orchestra. The German period ensemble’s energy and precision is ever evident

The crystalline beauty of Sampson’s voice makes it the ideal instrument for the wondrous language of ‘Weichet nur’ … the fit between Sampson and the orchestra – as she lives in Freiburg, her local band – is exemplary … a gem of a disc

a fresh, glowing reading of Bach’s Wedding Cantata … her radiant soprano growing from the organic opening and its oboe solo … a convincing journey, beautifully balanced