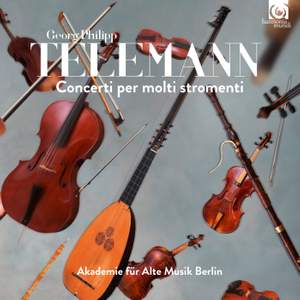 Telemann: Concerto for 2 Flutes and Calchedon in B Minor, TWV 53:h1

It has been said that Vivaldi wrote the same concerto 300 times. Could anyone possibly say that of Telemann? Not only do the examples here feature every kind of weird and wonderful instrumental combination – four trumpets, three horns, two flutes and calchedon, and even mandolin, harp and dulcimer; they also display the most amazing variety of styles, from Vivaldian exuberance to elegant Ancien Régime dances by way of learned German counterpoint. The works on this recording, with the exception of the concerto from the Tafelmusik, were probably written between approximately 1710 and 1720.

The Akademie für Alte Musik Berlin (Akamus) was founded in 1982 in Berlin. Since then, it has become one of the world’s leading chamber orchestras on period instruments and can look back on an unprecedented history of success. Since 1994, their recordings have been produced exclusively for harmonia mundi and have won all the important awards for classical recordings, including Gramophone, Edison, Choc de l’année as well as the Jahrespreis der Deutschen Schallplattenkritik. In 2006, Akamus received the Telemann prize of Magdeburg and in 2014 both the Bach Medal and Echo Klassik.

These felicitous, multi-instrument works show Georg Philipp's endlessly fertile and capricious imagination...Celebrating its 35th birthday this year, the Akademie für Alte Musik Berlin has led the vanguard of Baroque performance since 1982. Telemann's music is a perfect showcase for its virtuoso soloists as well as their sensitivity as chamber musicians...A delicate musical tapestry, fit to adorn the finest court banquet.

We find the same dynamism as La Stagione Frankfurt, but with a greater variety of rhythm and rubato. Their allegros are less breathless but have just as much panache.

It really is a varied feast...the Akademie für Alte Musik Berlin have added warm tonal brilliance and depth, bristling textures and a smartly nimble perkiness, and the result is a superbly colourful listen that ticks all possible boxes.

the collector’s item here is a work in F major for mandolin, hammered dulcimer, double harp and strings, with a beguilingly plucked central largo.

This scintillating disc should reassert his claim to be one of the most inventive composers of the 18th century...The Berlin Akademie für Alte Musik, celebrating its own 35th year, adds sophistication and a dash of edgy charm to the period instrument sounds.