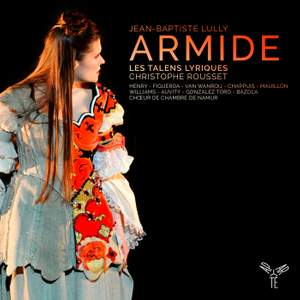 It is no accident that the most-recorded sections of Armide are the anti-heroine’s monologues. In Christophe Rousset’s exquisitely produced live recording, these are delivered with appropriate... — BBC Music Magazine, August 2017, 4 out of 5 stars More…

Following the huge success of 'Bellérophon', 'Phaéton' and 'Amadis', Aparté presents the highly-awaited rediscovery of 'Armide' by Les Talens Lyriques and Christophe Rousset, served by an impeccable cast, as the grand finale of their Lully recordings.

'Armide' is in the form of a tragédie en musique, a genre invented by Lully and Quinault, and was their last collaboration. It was a new form of opera that combined elements of classical French drama with ballet, French song and a new form of recitative. Critics in the 18th century regarded 'Armide' as Lully's masterpiece and it continues to be well-regarded, featuring some of the best-known music in French baroque opera and being arguably ahead of its time in its psychological interest. The subject, chosen for Lully by King Louis XIV, is the enchantress Armide’s unhappy love for the knight Renaud, drawn from Tasso’s 'Gerusalemme liberata'.

It is no accident that the most-recorded sections of Armide are the anti-heroine’s monologues. In Christophe Rousset’s exquisitely produced live recording, these are delivered with appropriate ferocity and charisma by Marie-Adeline Henry. The orchestral accompaniment is vivacious, with attentive and imaginative continuo playing, plenty of bite from the strings, and even more bite when La Haine (an abrasive Marc Mauillon) appears.

With its vivid central role for the sorceress Armide, in which soprano Marie-Adeline Henry here casts a potent spell, the opera captivatingly mixes fantasy and human passion. The many attractive passages of dance, a staple of French Baroque opera, elicit playing of subtle orchestral sonorities from Christophe Rousset and Les Talens Lyriques

Les Talens Lyriques play with consummate mastery of elegantly swaying inégales, fizzy brilliance or suave dancelike gestures as each moment in Lully's score demands...Marie-Adelaide Henry captures the full measure of Armide's conflicting emotions, and the undercurrent of theatrical tensions produced by Rousset and his band indicates why Rameau judged this sensational music to be worthy of analytical praise.

Rousset is, of course, a whizz with this sort of repertoire, and he has the finest feeling for this whole lost musical world…there is tremendous class and élan throughout … Rousset brilliantly recaptures the feel of the French court as though it were all in a day’s work … The cast of singers he has assembled is formidable, and worthy of the challenge. In particular, Marie-Adeline Henry in the title role has a magnificent sit-up-and-take-notice quality to her voice

The performance, recorded live at the Philharmonie in Paris, is outstanding. It is rightly dominated by Marie-Adeline Henry’s powerful Armide … a thoroughly satisfying cast. Christophe Rousset is indisputably the outstanding Lully conductor of our day, or indeed perhaps any other day … a recorded performance that, thanks largely to Henry’s shattering Armide, I would rate as one of the best of any Lully opera

Rousset is a state-of-the-art Lulliste, here conducting a memorable cast led by Marie-Adeline Henry’s fierce antiheroine, who rushes headlong into despair and madness...The dance music is irresistibly done. If you don’t know much Lully, this will convert you.

[Henry is] a very powerful singer…she’s somebody who is much freer and expressive than maybe what we would have heard 10 or 20 years ago in a recording of this work … there’s some lovely accompaniment there in the continuo playing, the space they give the singers to develop the passion and the emotion … a fairly theatrical and dramatic rendition of this from very experienced Lully performers