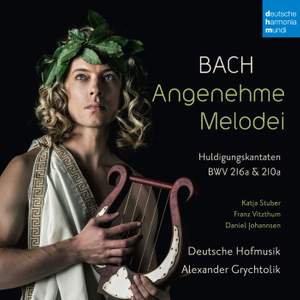 The harpsichordist Alexander Grychtolik has painstakingly reconstructed two homage cantatas from Bach’s Leipzig years. The first, Erwählte Pleissenstadt (BWV 216a), survives only in a draft libretto and a few fragments of notation rediscovered in 2003 among the posthumous papers of a Japanese pianist. The second, O angenehme Melodei (BWV 210a), survives only in a soprano part and a separate print of the libretto for the earliest of its three versions. The instrumental accompaniment had to be reconstructed from a later version of the same cantata. Perhaps the longest solo cantata Bach ever wrote, O angenehme Melodei deals with the divine origins of music. Both works were first performed in Leipzig in the 1730s and 1740s. Alexander Grychtolik has recorded the reconstructed cantatas in Berlin with his ensemble Deutsche Hofmusik and the singers Katja Stuber, Franz Vitzthum and Daniel Johannsen. The result is an impressive world première recording of magnificent music.