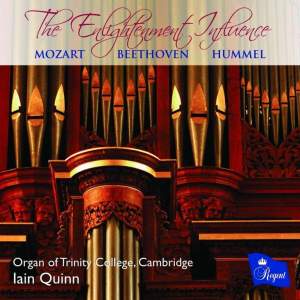 This new disc, recorded by Iain Quinn on the magnificent Metzler organ of Trinity College, Cambridge, contains all of the original solo organ works of Beethoven and Hummel, together with other works by Beethoven and Mozart originally written for mechanical organs. An unusual collection tracing the influence of the development of the Classical style on music for the organ.

Iain Quinn is Assistant Professor of Organ at The Florida State University where he is also Coordinator of Sacred Music.

He has held church appointments in Durham (UK), New York and Connecticut, and from 2005–2010 served as Director of Cathedral Music & Organist at the Cathedral of St John (Episcopal), Albuquerque, New Mexico. As an organist and conductor he has released thirteen CDs on the Chandos, Hyperion, Naxos, Paulus and Raven labels. Concert performances have taken him to the UK, USA, Europe, Australia, Belarus, Brazil, Canada, Hong Kong, Iceland, Japan, and Russia.

He has completed editions of the previously unpublished organ works and early Christmas cantata of Samuel Barber, the complete organ works of Carl Czerny, the complete anthems of John Goss, and Czerny’s arrangement of Corelli’s Op. 5 Sonatas. He is the author of The Genesis and Development of an English Organ Sonata, and The Organist in Victorian Literature.