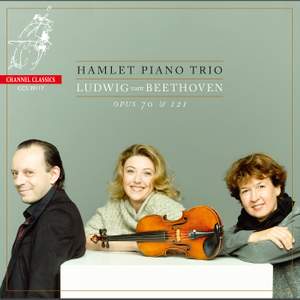 One only needs a few bars to appreciate the dynamism, the sure taste and the lack of mannerisms of Trio Hamlet…tautly and skilfully contrasted, their conversation demonstrates an especially refined... — Diapason, June 2017, 5 out of 5 stars More…

Three world-class musicians decided to join forces in 2011. As the Hamlet Piano Trio their reputation grows fast worldwide. All three have earned their stripes, both as soloists and as chamber musicians. Their first release of Mendelssohn Piano Trios received international critical acclaim. On this new release they focus on Beethoven whose ‘recalcitrant talent’ filled Vienna with mixes feeling for many Viennese did not understand this new music. (...) Too brutal, too headstrong, too restless, too obtrusive. The virtuosic pianist Beethoven nonetheless pursued his career as a composer. He entirely ignored the works he wrote in Bonn, beginning to count his opus numbers in Vienna afresh from the Piano Trios opus 1. They met with harsh criticism. ‘It cannot be denied that this man goes his own way. But what a bizar and tiresome way it is! Not a single tune, everything sounds recalcitrant. Again and again in search of peculiar modulations, nasty progressions and an accumulation of problems, so that we lose all patience and joy.’ Beethoven answered curtly: ‘They don’t understand a thing’. His time was yet to come. Later on he called the critic in question ‘an ox’. (...) from: liner notes by Clemens Romijn

One only needs a few bars to appreciate the dynamism, the sure taste and the lack of mannerisms of Trio Hamlet…tautly and skilfully contrasted, their conversation demonstrates an especially refined balance between the three instruments…this is a programme unified by the imaginative and aesthetic qualities of this excellent ensemble

They make a wonderful complementary pair, especially as played so vividly by the period-instrument Hamlet Trio.