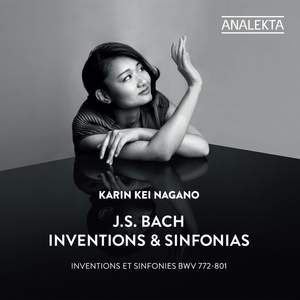 Analekta is extremely proud to announce the release of the second album by young pianist Karin Kei Nagano, devoted to the Inventions and Sinfonias of Johann Sebastian Bach.

The daughter of Maestro Kent Nagano and pianist Mari Kodama, Karin Kei Nagano looked, for this album, at the original version of the work, entitled Klavierbüchlein. That version – which starts with the key containing the fewest sharps and flats and whose complexity increases with each key change, creating as such a symmetric cycle of keys – seemed more fluid in the eyes of the musician. Under the gifted pianist’s fingers, a fascinating musical dialogue unfolds, exposing little by little the structural, emotional and spiritual beauty of these Inventions and Sinfonias, creating highly distinct little worlds in each of the pieces. Karin Kei is the winner of a number of important distinctions, including first prize and special jury prize at the Scriabin International Piano Competition in 2007, first prize and best interpretation prize at the Berlin International Piano Competition in 2007, and first prize at the Rubinstein International Piano Competition, 2009-2010.