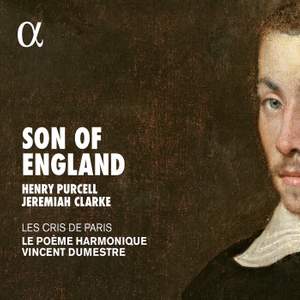 Clarke, Jeremiah: Ode On The Death Of Henry Purcell

Come, come along for a Dance and a Song

No more this ling'ring blow

And see, Apollo has Unstrung his Lyre

The Queen's Funeral March Sounded before a Chariot

Man that is born of a woman

In the midst of life we are in death

Yet, O Lord, most Mighty

Welcome to all the Pleasures

Beauty thou scene of Love

In a Consort of Voices

Henry Purcell died on 21 November 1695 at the age of thirty-six. The music he had written for the funeral of Queen Mary only eight months earlier was performed again for his burial service. Soon afterwards, several composers paid tribute to Purcell by writing odes in his memory. Jeremiah Clarke’s homage to ‘Orpheus Britannicus’ in his Ode on the Death of Henry Purcell is a deeply moving token of the younger composer’s admiration. Alas, Clarke too was destined to die in his prime, and we can only imagine what the destiny of British music might have been if their lives had been prolonged. After an acclaimed production of Dido and Aeneas, Vincent Dumestre and Le Poème Harmonique continue their exploration of the world of Purcell and seventeenth-century English music. Constantly keeping an ear out for multiple musical ramifications, from Dowland to Lully by way of the Elizabethan masques, this new programme spotlights the genius of Jeremiah Clarke, whose sadly premature death makes us regret all the marvels he might have produced. Here is a collection of masterpieces coupling two of Purcell’s most popular works with an exceptional discovery.