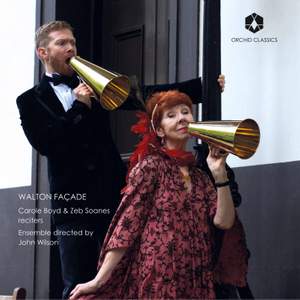 A Man from A Far Countree

Four in the Morning

Something Lies Beyond the Scene

'Introduction…' what is the most beautiful line of poetry?'

'…the technical side of your poetry…'

Thoughts on her early work

Other poets…poetry's position in the world

Carole Boyd has performed for over 35 years in theatre, television and radio, and is well known as Lynda Snell in BBC Radio 4’s The Archers. Zeb Soanes is a familiar voice on BBC Radio 4, and has presented The BBC Proms live on BBC Four in addition to films for The Culture Show, Newsnight and Songs of Praise.

John Wilson is a conductor of international repute particularly for his interpretations of light music, for which he has won many plaudits.

Carole Boyd, actor, and Zeb Soanes, newscaster, find a variety of voices to entertain the listener, and Wilson is an expert, committed Waltonian.