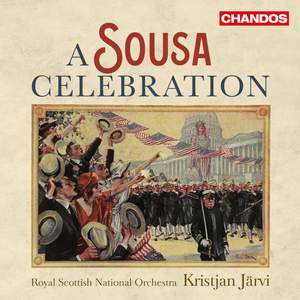 This irresistible collection of marches, waltzes and galops has quickly established itself as Office Pick-Me-Up of the Month; Jarvi describes this music in his booklet-note as 'the American counterpart... — Katherine Cooper, Presto Music, April 2017 More…

Sousa: The Thunderer (Arr. for Orchestra)

Sousa: On Wings of Lightning (Arr. for Orchestra)

Sousa: Humoresque on Kern's "Look for the Silver Lining" (Arr. for Orchestra)

Sousa: The Dwellers of the Western World: Suite

I. The Red Man (Arr. for Orchestra)

Sousa: The Stars and Stripes Forever (Arr. for Orchestra)

The exhilarating conductor Kristjan Järvi exploits the style and panache of the Royal Scottish National Orchestra in a festive programme of works by the American John Philip Sousa, ‘The March King’. This follows the spectacular recording of works by Julius Fučík, made by Neeme Järvi, Kristjan’s father. Including such famous pieces as The Stars and Stripes Forever (National March of the USA), Semper Fidelis (Official March of the US Marine Corps), and The Liberty Bell (theme tune for Monty Python's Flying Circus), this album is a celebration in its own right, enhanced by brightly coloured sound captured in high-quality surround-sound.

This irresistible collection of marches, waltzes and galops has quickly established itself as Office Pick-Me-Up of the Month; Jarvi describes this music in his booklet-note as 'the American counterpart of a great Viennese tradition', and it shows in affectionate performances which swing and lilt with Straussian abandon.

Washington Post, The Liberty Bell and The Stars and Stripes Forever are all well known, but most of the music here proves a discovery. Sousa is much more than military bombast and brass-band oompah, and Jarvi clearly has an affection for this American Johann Strauss, who could write an affecting Nymphalin, for cello and orchestra, that ought to be better know. The familiar pieces are rollicking fun.

Looking for something foot-tapping and beguiling, and with a fund of tunes? This Chandos Sousa release could be the answer.