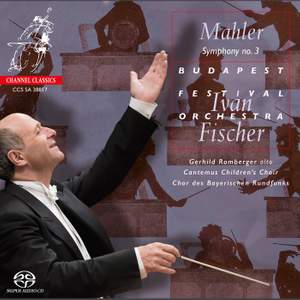 As vivid a performance as one would expect. That stylishly lazy trombone, a dying monster, is emblematic of the characteristic licence the conductor gives to his splendid Budapest players…the... — BBC Music Magazine, July 2017, 4 out of 5 stars More…

"Gustav Mahler’s Third Symphony, lasting one and a half hours or more, is not only his longest work but at the same time an exuberant and sunny ode to nature, mankind, the world and indeed life itself. And for this song of praise the composer requires both room and lavish means. No less than six movements, the richest of orchestral forces, and a contralto soloist and boys’ and women’s choirs whose sung texts help to bring across the symphony’s message, as in the Second Symphony and later in the Fourth and Eighth as well." (From liner notes by Clemens Romijn)

As vivid a performance as one would expect. That stylishly lazy trombone, a dying monster, is emblematic of the characteristic licence the conductor gives to his splendid Budapest players…the flowers of the field and the beasts of the forest have never been more vividly characterised, while Nietzsche's midnight ode is graced by the contralto of choice for Mahler symphonies, Gerhild Romberger…always alive, always interesting, vivid in sound

Every player seems to have thought about his part afresh and emotional power grows out of countless small moments, not the usual grandstanding. Some may find the performance too calculated. Others will admire its restraint, its eloquence, its distinctive voice.

Here for once is a Mahler symphony release that feels different from the outset...I doubt whether there has ever been a more precisely focused, more sheerly beautiful recording of any Mahler work...Reluctant to parade its roughest edges and disinclined to hurry, Fischer instead elicits a range of pristine, jewel-like colour that leaves its fabric refreshed...This Third is a must-have.

[Fischer] is a challenge, inviting listeners to rethink and recalibrate their responses to the piece. Not everyone will be prepared to make the leap, but those who do will be handsomely rewarded. Without question, the finest instalment in Fischer’s Mahler cycle to date; and what breathtaking sound.

Fischer’s unique orchestra always presents music afresh. Never has the clarity of the orchestral textures shone more vividly. Maybe a fractionally slower tempo would have made the first movement’s climax more overwhelming — but along the way, what delights, what insights.

“Like a sound of nature. That's the description that Mahler wrote above an oboe's cry in his epic Third Symphony from the 1890s. And it's a tag that Ivan Fischer has clearly taken to heart in this most eloquent and immersive performance…cuckoos, nightingales and birds galore; furry forest creatures; the anxiety call of the contrabassoon: they're spotted all over the bulk of this massive hymn to life in all forms. I've never heard a performance that captures nature's canvas so well

Every moment of this recording is fresh and insightful, traits we have now come to expect from Mr Fischer. But it is the finale, Mahler’s ode to love, that pulls at the memory — a miracle of phrasing; a quiet wonder of string tone and balance; a paean to a devotion tender, fragile and deep.

Fischer isn’t afraid to let go in the music’s wilder episodes...Mostly importantly, [he] conducts with a plasticity of line, a natural rubato, that maximizes expressivity without excess sentimentality.

What a finale: Fischer's flowing speeds avoiding any hint of bombast, the final cadence unforced and radiant. Everyone needs multiple recordings of this symphony. Add this new one to the pile.