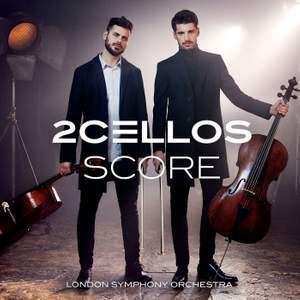 Enya, Roma Ryan, Nicky Ryan, Howard Shore: May it Be

Horner: For the Love of a Princess (from Braveheart)

James Horner, Will Jennings: My Heart Will Go On (from "Titanic")

Vangelis: Titles from Chariots of Fire

Bringing 2CELLOS’ game-changing sound and style to the most popular melodies ever written for classic and contemporary movies and television, Score finds Croatian cellists Luka Sulic and Stjepan Hauser exploring a more traditional sound-world. Joining them here – to provide the ideal aural backdrop to their virtuosity – is the London Symphony Orchestra, with conductor/arranger Robin Smith at the helm. Šulić and Hauser also co-produced Score with Nick Patrick (Jackie Evancho, Il Divo, Plácido Domingo).

Themes that drove some of the biggest blockbusters in film and television history are featured in fresh new treatments – including an arrangement of Ramin Djawadi’s melodies that score ‘Game of Thrones’, Oscar-winning themes from James Horner’s ‘Titanic’ (‘My Heart Will Go On’), John Williams’ ‘Schindler’s List’ and Vangelis’s ‘Chariots of Fire’, as well as ‘For the Love of a Princess’ from Braveheart (also by Horner); “May It Be” from The Lord of the Rings: The Fellowship of the Ring (introduced in the film by Enya); and the inspiring “Now We Are Free” from Gladiator, by the film’s composer Hans Zimmer, Lisa Gerrard and Klaus Badelt.

The vocal beauty of the cello’s sound is also a perfect match for a brace of romantic themes, which include the Henry Mancini/ Johnny Mercer song ‘Moon River’ from Breakfast at Tiffany’s; Ennio Morricone’s beautiful themes for Cinema Paradiso and Malena; Nino Rota’s love theme for The Godfather; Francis Lai’s Oscar-winning theme from Love Story; Hans Zimmer’s theme from Rain Man; and Stanley Myers’ haunting “Cantilena” heard in The Deer Hunter.