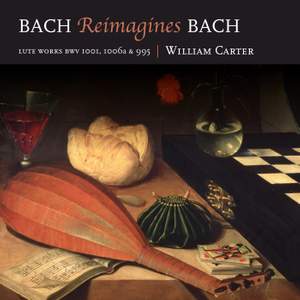 Thus there is the soloists suppleness and flexibility of phrase; but there is also the obvious enjoyment of pure sonority and tints and shades of tone. There is a lovely use of 'notes inegales'... — Gramophone Magazine, May 2017 More…

William Carter’s exemplary musicianship is showcased to its fullest on this new recording of Bach’s own transcriptions for the lute.

Almost unplayable in parts many musicians take certain liberties with the music so that it flows more naturally, but Carter’s determined approach to authenticity sees the lutenist achieve the near impossible: playing the music as it was originally written.

Carter very subtly enhances BWV 1001, originally for unaccompanied violin, in keeping with Bach’s own perceived style, namely to only add ‘as much harmony as he found necessary.

Bach’s own mild refashioning of BWV 1006, originally a solo violin, allows Carter to highlight the relaxed and intimate nature of the music.

The final piece undergoes the most extensive reimagining as Bach expertly transforms the Fifth Cello Suite into a successful is it that Carter considers it to be, in understanding the essential nature and expressive qualities of the lute, ‘the most perfect piece of lute music in existence’.

Thus there is the soloists suppleness and flexibility of phrase; but there is also the obvious enjoyment of pure sonority and tints and shades of tone. There is a lovely use of 'notes inegales' in the Siciliana and the Courante of both suites as well, while other dance movements benfit from Carter's deceptively subtle, distinctive imagination.

Played with intimate understanding by William Carter. The introspective quality of his playing makes for some magical moments of stillness and relection and the focus of the recording itself adds to the effect.