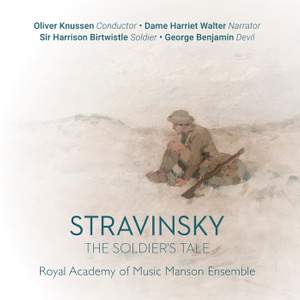 It’s recorded in a way to convey to the maximum both the poetic detail and the expert pacing of Knussen’s finely-pointed reading, and to give full rein to Dame Harriet’s wonderfully free-spirited... — BBC Music Magazine, October 2017, 4 out of 5 stars More…

Stravinsky: Fanfare for a New Theatre

Birtwistle: Chorale from a Toy Shop - For Igor Stravinsky

Birtwistle: Chorale from a Toy Shop - For Igor Stravinsky

I. Introduction. The Soldier's March

II. Music for Scene 1. Airs by a Stream

V. Music for the End of Scene 2

VI. Reprise. Airs by a Stream

VII. Music for Scene 3. Airs by a Stream

I. Reprise. The Soldier's March

XI. Triumphal March of the Devil

For his debut recording with Linn, conductor Oliver Knussen has assembled an impressive cast of contemporary composers for The Soldier's Tale: Harrison Birtwistle as the soldier and George Benjamin as the Devil, with actress Dame Harriet Walter as the narrator. The longest work on this disc, The Soldier's Tale mixes fiendishly difficult changes of time signature with Stravinsky's newly discovered love of jazz with melodies which echo his larger pre-war scores. It is also a work that demonstrates immense clarity and moving simplicity at times, and a sardonic wit at others.

With such a starry cast this recording will be of particular interest to those with an interest in contemporary music, especially considering the addition of two new Birtwistle world premiere versions of Chorale from a Toy Shop written specially for the recording.

It’s recorded in a way to convey to the maximum both the poetic detail and the expert pacing of Knussen’s finely-pointed reading, and to give full rein to Dame Harriet’s wonderfully free-spirited yet exact Narrator…this disc merits a strong recommendation

[The Soldier's Tale] is committed to the mysterious timelessness of the entertainment and its abstractly progressive nature. The complementary, commemorative shorter pieces, including two Birtwistle items, are as exquisitely turned as might be expected from this source.

the young players of the Royal Academy really revel in these and play with guts and a swagger which must be just what Stravinsky intended. Oliver Knussen does the honours from the podium with his customary skill

This remarkable disc sets Stravinsky’s music-theatre piece The Soldier’s Tale beside 12 minutes of miniaturised instrumental and memorial music...Birtwistle, gruffly northern, takes the role of the Soldier, and Davies would have been the Devil had he lived. Instead, the composer George Benjamin fluently participates.

Birtwistle [is] a superbly laconic Soldier – it sounds as though he couldn’t care less when his luck is down; the despondency is glorious – and George Benjamin makes a deliciously supercilious Devil...Harriet Walter narrates adeptly; the playing of the Royal Academy’s Manson Ensemble is taut, fearless and detailed.

as The Soldier, Birtwistle is characteristically laconic; while Benjamin’s Devil is vigorously projected and rhythmically precise. Knussen’s account of the score, alongside a generous collection of miniatures by Birtwistle, Maxwell Davies and Stravinsky, is crisp and alert, securing excellent playing throughout, and Harriet Walter’s narration is a delight