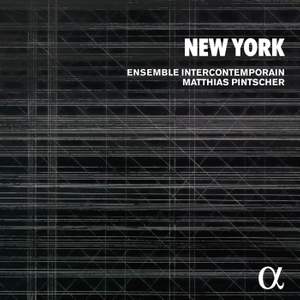 Intégrales proves an energetic opener for this survey of the city from the eminent, Paris-based Ensemble Intercontemporain, lucidly conducted by their music director, Matthias Pintscher. Likewise... — BBC Music Magazine, August 2017, 3 out of 5 stars More…

Fulmer: Within His Bending Sickle's Compass Come for Horn and Ensemble

Reich: WTC 9 / 11 for String Quartet and Pre-Recorded Voices and String

I. Trio for Flute, Clarinet and Bassoon

II. Duo for Oboe and Horn

Here is the third release in the collaboration between the Ensemble Intercontemporain and Alpha.

This time the musicians of the ensemble and their conductor Matthias Pintscher focus on American music: Intégrales by Edgar Varèse (1924), Music for Wind Instruments by John Cage (1938), Instruments I for six instruments by Morton Feldman (1974), Elliott Carter’s Concerto for clarinet and ensemble (1996), Steve Reich’s WTC 9/11 for string quartet (2009-10), Sean Shepherd’s Blur (2011), and David Fulmer’s Within his bending sickle’s compass come for solo horn and ensemble (2014-15). More than ninety years of creativity and musical profusion at the heart of the global city that the Ensemble Intercontemporain celebrates today.

This double album is released to coincide with the fortieth anniversary of the EIC: forty years of discoveries and of promotion of contemporary music at the highest level of performance.

Intégrales proves an energetic opener for this survey of the city from the eminent, Paris-based Ensemble Intercontemporain, lucidly conducted by their music director, Matthias Pintscher. Likewise a shoo-in is the mischievous sparkle of NY native, Elliott Carter, whose Concerto for Clarinet and Orchestra is dispatched with virtuoso ease by soloist Jérôme Comte.

The first item on this two-CD evocation of New York’s creative spirit, Varèse’s Intégrales for 11 winds and four percussion, is the eternal standout. There’s nothing quite like its iconoclastic, self-determining vigour: a new world in 11 minutes.

What does New York sound like? This double-disc collection charts the city’s past century of modern classical music...the performances [Pintscher] gets from [Ensemble Intercontemporain] here are virtuosic, rich, detailed and fairly sober.