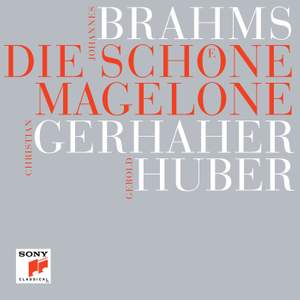 His acute sensitivity to text is matched by subtly inflected tone, helping him capture each of the piece’s fleeting moods. Huber’s contribution is a touch more prosaic. — BBC Music Magazine, August 2017, 4 out of 5 stars More…

Johannes Brahms “Die schöne Magelone” is a masterpiece and one of the most beautiful song cycles of the romantic era.

Christian Gerhaher and his pianist Gerold Huber team for another reference recording.

Gerhaher has won numerous prestigious awards including the ‘Singer of the Year’ in 2016 from Opernwelt and the coveted Wigmore Medal for ‘outstanding musicianship in opera, oratorio and song’

Christian Gerhaher was inspired to record the cycle by successful live concerts which he and Huber gave together with famous German author Martin Walser (who celebrates his 90th birthday at the end of March) who read his own new version of Ludwig Tiecks “Magelone “ novella, which is the base for the song cycle.

In the 1860s Johannes Brahms composed one of the most beautiful song cycles of the romantic era: Die schöne Magelone. Now baritone Christian Gerhaher, a lied singer of international renown, has joined forces with his longstanding accompanist Gerold Huber to record Brahms’s masterpiece. For Gerhaher, named singer of the year in 2016 by the German trade journal Opernwelt and awarded the coveted Wigmore Medal in England for “outstanding musicianship in opera, oratorio and song”, the project is a dream come true.

The 15 poems that Brahms fashioned into “romances” are taken from Ludwig Tieck’s novella The Wondrous Romance of Magelone the Fair and Peter Count of Provence (1797). Inspired by a medieval legend, it tells of the love of the valiant knight Peter of Provence for Magelone, the daughter of the King of Naples.

In 2011 Christian Gerhaher commissioned the well-known German writer Martin Walser to produce a new version of the text, which he then premièred in Coburg together with Gerold Huber and Walser himself. Performances of this new version, with Ulrich Tukur as narrator, will follow in 2017 in Heidelberg (13 July), London’s Wigmore Hall (15 July) and the Munich Opera (17 July). Further performances are scheduled for Bamberg, Frankfurt am Main and Vienna in 2018.

His acute sensitivity to text is matched by subtly inflected tone, helping him capture each of the piece’s fleeting moods. Huber’s contribution is a touch more prosaic.

(Gerhaher's) colouring is more precise and apt than I've ever heard from him. And that's saying a lot...Gerhaher and Huber make the piece something you can take to your heart

Gerhaher is more compelling in this music even than Fischer-Dieskau is in his classic recording with Sviatoslav Richter. Gerhaher and Gerold Huber sound more athletic in the vigorous songs, and the baritone is more rapt and spiritual in the famous Ruhe

Once again they show how it should be done...Huber is wonderfully responsive; as for Gerhaher, he is velvet-toned and confiding, hanging long melodies off deliciously pointed words, and shaping lines that soar upwards then gently descend.