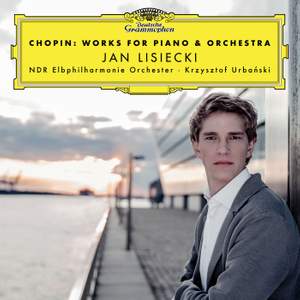 Jan Lisiecki puts the spotlight on rarely recorded works of the orchestral Chopin, the repertoire that became his calling card and kick-started his international career. Jan’s release of both piano concertos (recorded at the age of 13 and 14) with Sinfonia Varsovia and Howard Shelley was praised as one of the most exciting contributions to Chopin’s 200th anniversary year in 2010. The two live recordings that have earned Jan the prestigious Diapason Découverte award in May 2010, placed him on the map as a promising newcomer and resulted in his exclusive DG recording deal. Now, Jan has fulfilled his dreams of completing the orchestral Chopin repertoire: To record all remaining works for piano and orchestra recorded in the studio with the NDR Elbphilharmonie Orchester, conducted by the Polish conductor Krzysztof Urbański.

The youthful Polish-Canadian pianist dispatches their fiendish demands with easy virtuosity and no little wit, while Urbanski brings an authentic Polish flavour to the Elbphilharmonie’s playing.