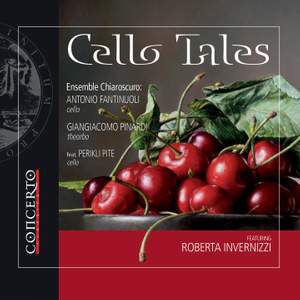 Boccherini: Cello Sonata in A major

The main theme of this work of the Ensemble Chiaroscuro follows closely that of the first disc (also produced by Concerto Classics, “Baroque Enchantment”): the proposal is to collect a series of pieces to form a sort of concert program, in order to tell a true story in music, hence the title “Cello Tales”. The listener will in fact be led, through the notes of Antonio Fantinuoli cello, in a journey of rediscovery of the great masters and pioneers of the leading instrument of this recording, unearthed by a careful research of ancient manuscripts done by the same artist.

From Giovanni Battista Degli Antonii and Giovanni Battista Vitali, to Domenico Gabrielli and Francesco Alborea, passing through Giovanni Battista Somis and Luigi Boccherini, up to Joseph Clemens dall’Abaco, all the most significant compositions that punctuate the technical evolution of the instrument from the seventeenth century to the eighteenth century until the final tribute to the ‘father’ of all cellists J.F. Dotzauer. The beautiful sound of the cello as the only protagonist, therefore: Antonio Fantinuoli is accompanied on this trip, as well as by Giangiacomo Pinardi and his theorbo (an integral part of the Ensemble), also by Perikli Pite at the cello and Craig Marchitelli with the theorbo. Special guest Roberta Invernizzi in an Aria of Gabrielli.