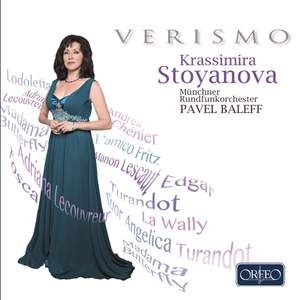 It’s a bright and powerful sound – less rich and plummy than Netrebko, a great deal steelier than Gheorghiu – and is under total technical control...the highlight is probably the extended 14-minute... — Gramophone Magazine, May 2017 More…

After her debut CD I palpiti d’amour (2008), followed by Slavic Opera Arias (2011) and a Verdi album (2014), the Bulgarian soprano Krassimira Stoyanova now turns her attention to verismo – in the broadest sense of the word. Again and again she lends those roles by Puccini, Mascagni, Cilea (Adriana Lecouvreur), Giordano (Andrea Chénier) and Catalani (La Wally) with her inimitably nuanced and finely resonant lirico spinto soprano, a voice which is both flexible and capable of the highest notes while possessing an enchanting sonority and profound middle range.

This selection of great arias is preceded seamlessly by the great and poignant death-scene aria sung by the protagonist of Pietro Mascagni’s opera Lodoletta, in which a spurned woman imagines her unattainable lover as she lies delirious in the snow – maddened by hunger and cold – before she slips into the hereafter.

As with her two previous albums for the Orfeo label, she is accompanied by the Munich Radio Orchestra under Pavel Baleff with great sensitivity and intensity, thereby giving each of these classic opera scenes their own musical world.

It’s a bright and powerful sound – less rich and plummy than Netrebko, a great deal steelier than Gheorghiu – and is under total technical control...the highlight is probably the extended 14-minute extract from Mascagni’s rarely heard Lodeletta, a well-written scene, movingly performed here…Stoyanova is a very impressive singer, and this is another commanding (and well-recorded) recital

She brings a special charm to the opening measures of Suzel’s ‘Son pochi fiori’ and Butterfly’s ‘Un bel di vedremo’, where the lyricism of her approach enables her to bring the words more interestingly to life than is the case elsewhere.

Stoyanova has not just the voice but the manner for these roles. She relishes the vocal sweep, direct emotion and expressive possibilities of each aria…Her use of portamento is masterly and she has verismo style at her fingertips. A gorgeous disc.