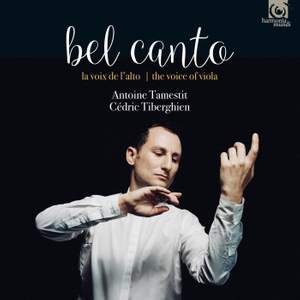 Voice of the Viola

Tiberghien's nimble accompaniments are always a joy, but even a peek from Tamestit's viola throws them in the shade. Down in the depths, Tamestit's notes have the gruff tones of a hungry bear.... — BBC Music Magazine, August 2017, 4 out of 5 stars More…

Ney: Prelude No. 15 for Solo Viola

Going well beyond mere historical interest, this album unveils the charms of a repertoire that delighted Parisian concert halls and salons throughout the 19th century. It demonstrates how the viola finally emerged from the violin’s shadow thanks to virtuoso playing, now resuscitated by the talent of Antoine Tamestit and Cédric Tiberghien in pieces which offer much more than the exquisite languors of bel canto. Italian for 'beautiful singing' or 'beautiful song', the term remains vague and ambiguous but is commonly used to evoke a lost singing tradition; in this case the famed singing tone of Antoine Tamestit's viola, a 1672 Stradivarius, loaned by the Habisreutinger Foundation.

Antoine Tamestit’s distinguished discography includes Berlioz’s 'Harold en Italie', which was recorded with the London Symphony Orchestra and Valery Gergiev and released in 2015 by LSO Live. For Naïve he has recorded three of the Bach Suites, Hindemith solo and concertante works recorded with the Frankfurt Radio Symphony Orchestra and Paavo Järvi, and an earlier recording of 'Harold' with Marc Minkowski and Les Musicians du Louvre.

This particular diva is the viola; its servant is Antoine Tamestit, here making his first solo recording for harmonia mundi.

Tiberghien's nimble accompaniments are always a joy, but even a peek from Tamestit's viola throws them in the shade. Down in the depths, Tamestit's notes have the gruff tones of a hungry bear. Further up, they're honey-coated, though sunburnt melancholy is never far away.