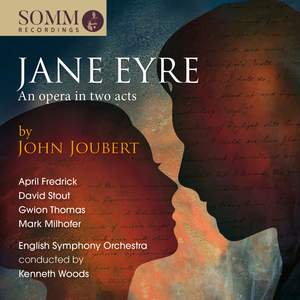 April Fredrick’s passion and clarity rings out from every register, and David Stout’s searing cries during Act II are hard to forget. Kenneth Woods and his orchestra revel in the opera’s melodic... — BBC Music Magazine, June 2017, 4 out of 5 stars More…

Act I Scene 2: Now the shadows close about me (Rochester)

Act I Scene 3: This is the sweetest hour (Jane)

Act I Scene 3: My love, lay your head (Jane, Rochester)

Act II Scene 3: To put my arms about the one (Jane, Rochester)

David talks to the Birmingham-based composer, who turned 90 last month, about his opera Jane Eyre - recently recorded for the first time on Somm Records.

With this month’s new release SOMM pays an affectionate tribute to John Joubert who is 90 this month. It also adds a veritable gem to the operatic catalogue: the world première of his 2-Act Opera Jane Eyre recorded live during a concert performance at the Ruddock Performing Arts Centre, Birmingham on 25th October last.

The following is an excerpt from a review by Christopher Morley, Chief Music Critic of the Birmingham Post, which appeared two days later. We quote parts of this with his permission:-

"The tears in our eyes at the end of this professional premiere of John Joubert's opera Jane Eyre were quickened not only by the ravishing music of Jane and Rochester's reconciliation, but also by the sheer emotional importance of the occasion. Jane Eyre has been a labour of love for the veteran composer, and therefore had to retreat backstage while lucrative commissions continued to pour in. And then, after its eventual completion, various disappointments stood in its way. But on Tuesday at last Joubert's vision was fulfilled, and, surrounded by his family, the now frail composer acknowledged tremendous applause after what was a tremendous performance of what is indeed a tremendous score, and with an adroit libretto by Kenneth Birkin. Certainly we can hear in the music that Joubert loves Wagner, Strauss, Janacek, Britten and Shostakovich, and in his generosity of spirit he does not deny that, but instead has the integrity to mould all these influences into a communicative language which is entirely his own. The orchestra carries the main weight of the narrative, rising to climactic moments of structure, and introducing and later recalling motifs which colour the tale's events. And the melodies are glorious, all rendered in this concert performance with immense security and colour by the English Symphony Orchestra under Kenneth Woods. David Stout's Rochester was tortured and charismatic, his baritone shifting from honeyed tenor registers to cutting lower notes. And as Jane Eyre herself, April Fredrick did more than display a perfectly-formed voice, fearless in melisma, bright at the top and reflective in descent, all the while acting with a genuine response to her character's development; she really did embody Charlotte Bronte's heroine."

April Fredrick’s passion and clarity rings out from every register, and David Stout’s searing cries during Act II are hard to forget. Kenneth Woods and his orchestra revel in the opera’s melodic beauties and haunting instrumental colours. The same pleasures await the enquiring listener

John Joubert is an experienced professional when it comes to writing for the lyric stage and his latest opera only reaffirms the fact Joubert has plenty of theatrical nous and knows a thing or two about the precarious love triangle that exists between a piece of literature, a piece of music and a story to be told on a stage.

This set is a triumph for Kenneth Woods and his excellent cast and orchestra. It’s also a triumph for SOMM who yet again – but on a much more ambitious scale this time – have demonstrated commitment to Joubert’s music. Above all, though, this release is a triumph for John Joubert and the best possible salute to him on the occasion of his 90th birthday

He [Joubert] sketches time and pace with clean motivic gesture; he allows the text to shape the melodies; and, above all, his music has a logic that creates its own, essentially symphonic momentum.

music that is warm and glowing yet astringent, too...Any lack of studio polish is overridden by the flow conductor Kenneth Woods brings to the score, and by the principal singers, especially April Fredrick, who gleams in the title role.

The two-act structure does work beautifully, the cast is uniformly strong, their sense of commitment and discovery of their superb score palpable.

This recording of that event coincides with Joubert’s 90th birthday in March 2017 and delivers the perfect tribute. It’s a thrilling, emotional experience characterised by a score rich in feeling (variously conjuring Wagner, Strauss, Puccini, Britten and others) and dramatic focus...Kenneth Woods's assured conducting coaxes committed playing from the English Symphony Orchestra with vocal performances throughout strong and characterful