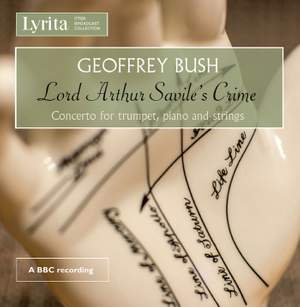 Lord Arthur Savile's Crime: And Now I Want You All to Meet Mr. Podgers

Lord Arthur Savile's Crime: Count Rouvaloff Has Given Me an Introduction to You

Lord Arthur Savile's Crime: For What The Dean Is About to Receive - Interlude No. 2

Lord Arthur Savile's Crime: I Gazed Around in Despair

Composers do not usually make conscious choices about the music they write: they write in accordance with the talents given to them. For this reason I do not write complex or experimental music: I have no gift for such things. Instead, my music is lyrical, rhythmic, economical, clear cut in texture and, as far as I can make it, direct of utterance. This incisive assessment by Georffrey Bush of his own output is indicative of his lucidity on the printed page as well as on the stave, both accomplishments the result of a compulsive urge to communicate effectively. (Geoffrey Bush) Though composition was foremost among his many gifts, Bush was something of an all-rounder. He performed as both pianist and organist, made regular broadcasts for the BBC and was also a successful writer. His eminently readable guide to music, Musical Creation and the Listener, first appeared in 1954. His wide-ranging catalogue includes music for the stage, choral works, church music, orchestral pieces, chamber music and songs. Of his two symphonies, the first, which has at its core an elegiac blues in memory of Constant Lambert, was premiered at the Cheltenham Festival in 1954 and performed at the Proms four years later, whilst the second, subtitled "The Guildford", was commissioned for the 700th anniversary of the City of Guildford in 1957. He wrote a number of works for chamber orchestra in which his understanding of the intimacy and inherent reciprocity of the medium resulted in scores that are eloquent and conversational, epitomising his credo quoted at the head of these notes.