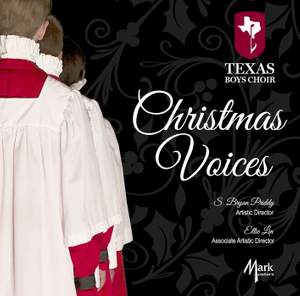 Leontovich: Carol of the Bells

Christmas Voices is the second of four compact disc recordings to be released by theTexas Boys Choir as part of the Legacy Project, a five year recording project made possible through a generous grant by the Jill and Charles Fischer Foundation in Fort Worth, Texas. The boychoir tradition has existed for more than 800 years. Much of this tradition has been rooted in the Christian church, with music from the 1500's to modern times being composed for choirs of men and boys. Despite this long history, there is a distinct need for superior recordings utilizing boys' voices as well as a means to produce such recordings for a world-wide listening audience. Texas Boys Choir’s mission is to be a world-class boys choir, to develop personal excellence, and to inspire a lifelong passion for choral artistry. Since its founding in 1946, TBC has toured regularly, both nationally and abroad, performing for significant world leaders, as well as thousands of listeners via concerts and appearances on National Television and radio broadcasts. The two-time Grammy Award-winning choir has produced more than forty professional recordings with Columbia, Decca, Mark Masters, and other independent labels.