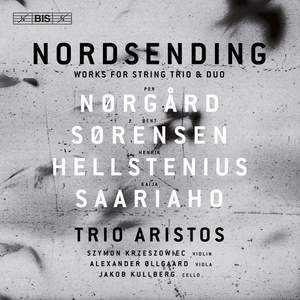 There is some exquisite playing from Trio Aristos — Gramophone Magazine, May 2017

Nordsending was the name given by southern Norwegian people of the late Medieval and Early Modern period to magical attacks from the sorcerous sub- Arctic and Arctic. It was the ‘broadcast from the north’. The Scots, the English and the Danes had other names for it. But all understood it similarly: the invisible medium through which turbulent air, splinters of iron or quartz, sharp stones, stone arrowheads and little mice were shot into the bodies of the healthy by Nordic witches.

This music is a different kind of nordsending, of course, being a ‘broadcast’ of works for string duo and trio from Henrik Hellstenius, Per Nørgård, Kaija Saariaho and Bent Sørensen – composers frequently classified as ‘Nordic’.

There is some exquisite playing from Trio Aristos