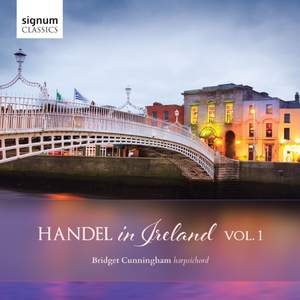 Roseingrave: Suite No. 8 in G Minor

Bridget Cunningham marks St Patrick’s Day with a new harpsichord CD that gives a glimpse into Handel’s fascinating time in Dublin. In 1741 at the age of 56, following a financially difficult time in London and with fashions turning against Italian opera, Handel went to Dublin for nine months. At that time it was a thriving musical city, and the second largest in the British Isles after London.

The story of this fascinating trip is told in both music and detailed accompanying notes by harpsichordist and musicologist Bridget Cunningham. This disc is part of Cunningham’s ongoing series with the ensemble London Early Opera, which has already seen releases of several volumes of Handel’s music, including 'Handel in Italy' and 'Handel at Vauxhall'.