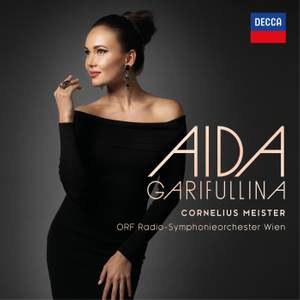 Hymn to the Sun

Aida Garifullina’s debut album is one of the most eagerly awaited operatic events of the year!

Since her triumphant win at Plácido Domingo’s Operalia 2013, the young star soprano from Kazan has become the hottest newcomer of the opera world – winning audiences over with stand-out performances at Vienna State Opera and Mariinsky Theatre, recitals at the Wigmore Hall and Vienna Musikverein and a US tour with Andrea Bocelli. Boosting a unique media profile Aida has made her feature film debut in Florence Foster Jenkins alongside Meryl Streep and Hugh Grant. She has appeared on German, Austrian, French and Russian TV multiple times, including televised performances at Vienna and Dresden Opera Balls, Rolando Villazon’s Stars von Morgen on ZDF, and the 2016 Bastille Day Concert in Paris in front of the Eiffel Tower, watched by millions. Aida has duetted with some of opera’s greatest stars, including Plácido Domingo, Andrea Bocelli, Juan Diego Florez, Dmitri Hvorostovsky and Rolando Villazón

Her debut album showcases Aida at her very best – treasures of her beloved Russian opera are combined with two of her signature arias: Delibes’ ‘Bell Song’ (as featured in her stand out performance in Florence Foster Jenkins) and Gounod’s ‘Je veux vivre’, which she performed to rave reviews at the Vienna Opera Ball. The selection also includes the hauntingly beautiful folk song ‘Alluki’ sung in Aida’s native Tatar language, recorded here for the first time, and ‘Midnight in Moscow’, adding her vocal to a Balalaika orchestra recording from the early 1960s in this classic Russian tune