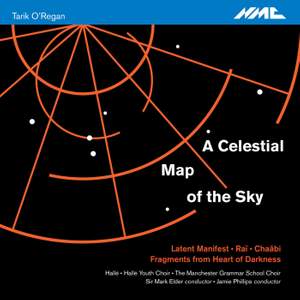 Offer, Tarik O'Regan: A Celestial Map of the Sky

O'Regan: A Celestial Map of the Sky

O'Regan: Fragments from a Heart of Darkness

Tarik O'Regan's title work A Celestial Map of the Sky, here performed by a children's choir with the Hallé, is a vibrant work with propulsive, syncopated rhythms contrasting darker moments of refl ection. The work is inspired by two woodcuts engraved by German polymath Albrecht Dürer in 1510 that are amongst the oldest known printed European star charts of the northern and southern celestial hemispheres.

A deep-rooted interest in North African traditional music (Tarik's family are from Morocco and Algeria) shapes two of the orchestral works on this album. Raï and Chaâbi are not ethnographic studies but are infl uenced by Algerian folk music forms.

Latent Manifest is an ingenious expansion of a single gesture from a Bach sonata, magnifi ed to create an entire universe of orchestral colour.

The bonus download track, Now fatal change, for countertenor and violin, is a reworking of material found in Chaâbi and is set to the same text by Nahum Tate that Purcell used for Tell me, some pitying angel.