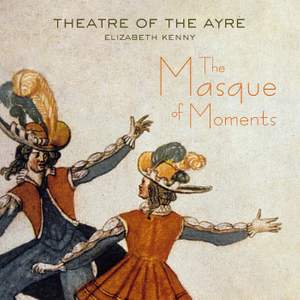 Offer, The Masque of Moments: Theatre Of The Ayre

Theatre Of The Ayre, Elizabeth Kenny

Sophie Daneman’s sensuous soprano offsets the boyish voice of the 15-year-old Rosanna Wicks, while the airy trebles of Salisbury Cathedral Choir balance the earthier tones of the lay clerks and... — BBC Music Magazine, June 2017, 4 out of 5 stars More…

anon.: The Earl of Essex Measure

Campion: A Maske in Honour of the Marriage of Lord Hayes: Now Hath Flora Robb'd Her Bow'rs

Ferrabosco, A II: The Haddington Masque: Why Stays the Bridegroom to Invade

Campion: A Maske in Honour of the Marriage of Lord Hayes: Move Now with Measur'd Sound

Johnson, R: The Gypsies Metamorphosed: From the Famous Peak of Derby

anon.: The Masque of Augurs: Tho' it May Seem Rude

anon.: The Second of the Temple Antic

Coleman, Charles I: The Queens Entertainment at Richmond: Did Not You Once, Lucinda, Vow

Giovanni Coperario: The Masque of the Inner Temple and Gray's Inn: Coperario

Lawes, H: A Maske Presented at Ludlow Castle: From the Heav'ns Now I Fly

Lawes, W: The Prince D'Amour His Masque at the Middle Temple: The Last Song or Valediction

Lawes, W: The Triumph of Peace: Of the Inns of Court Masque

Locke: Cupid and Death: Mercury and Nature in the Elysian Fields

Lanier: The Vision of Delight: I Was Not Wearier

Elizabeth Kenny’s Theatre of the Ayre reveals some of the most extraordinary music of the 17th century on The Masque of Moments, their debut recording for Linn.

Focusing on the ‘Ayre’, the central part of a Masque, it offers a fascinating glimpse of the audacious and experimental virtuosity that is often absent from our image of English music of this time.

Inspired by the achievements of the ‘Lutes and Voices’, Kenny developed The Masque of Moments in 2015, highlighting the glories of little-known vocal music from the Jacobean and Caroline masque.

The ‘Lutes’’plucked sound world, of which this recording gives a hint, reflects a cornucopia of sounds used to create everything from a tavern scene to a reflection of paradise.

Sophie Daneman’s sensuous soprano offsets the boyish voice of the 15-year-old Rosanna Wicks, while the airy trebles of Salisbury Cathedral Choir balance the earthier tones of the lay clerks and male soloists…[the instrumental playing] is full of flair and improvisatory spirit