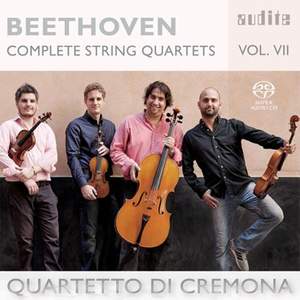 The Quartetto di Cremona have completed another stage in their adventurous journey through the cosmos of Beethoven's String Quartets, visiting the Quartet in G major from the Op. 18 set and the last of the Op. 59 Quartets.

The performance culture and market for the string quartet in the late eighteenth century was markedly different to that of later times: the young Beethoven wrote his Quartets Op. 18 for amateurs. The G major Quartet, the second in the collection, was one such work that could bemastered by talented aristocrats and bourgeois connoisseurs - which is not to say that its complexities or musical challenges are in any way diminished.

With the so-called "Razumovsky" Quartets,the string quartet reached adulthood. And one only needs to compare the technical and intellectual demands of Op. 59 to contemporary works (such as the quartets of the young Franz Schubert) in order to recognise that Beethoven no longer composed for able amateurs, but for highly professional specialists.This becomes particularly obvious in the finale, an extended and extremely virtuosic fugue.

The Quartetto di Cremona have combined these two works from Beethoven's early and middle periods for the seventh volume in their Complete Beethoven String Quartets recording series. Both works end with an "earworm" - one in the classical spirit and one in the form of a rapid fugue - finale furioso!

The Quartetto di Cremona’s ongoing Beethoven cycle has particularly impressed me for its visceral excitement and pulsating energy…[they demonstrate] consummate mastery of soft mysterious playing, experienced here to best advantage in the unexpectedly veiled sounds they conjure up

A long and fascinating journey comes to an end. These interpretations are powerful, vibrating, excitingly intense and inspiring from the very first to the very last note, providing decisive proof of Quartetto di Cremona’s overwhelming technical capacity and fantastic musicianship.