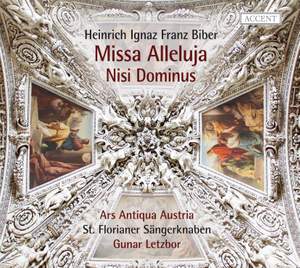 This latest offering is compelling, even if moments of discomfort occasionally invade the singing — BBC Music Magazine, June 2017, 4 out of 5 stars More…

The Missa Alleluja was probably composed after 1690 and certainly before 1698: the original score from Salzburg is lost but excellent copies have been preserved at the Upper Austrian abbey at Kremsmünster, which serve as a basis for the present recording. Biber fully exploited the possibilities of Baroque instrumentation in the Missa Alleluja: a chorus with 2 sopranos, 2 altos, 2 tenors and 2 bass voices grants him a large number of combinations of voices and thus constant changes of timbre. The strings 'choir' also has six parts, with both violins often written virtuosically. A 'chorus' of 3 trumpets and 2 cornetti is even surpassed in tonal mass by that composed of 2 clarinets, 4 trumpets and timpani. This large number of trumpets emphasises the cheerful character of the work and is luxurious by Austrian standards.

This latest offering is compelling, even if moments of discomfort occasionally invade the singing

This disc is a treasure. Don't miss it

This 36-part Missa Alleluja — an eight-voice chorus, plus Ars Antiqua’s three instrumental choirs — has a spring to its often triple-time step, duly emphasised by Letzbor. The hocketing of the Christe eleison is a joyful surprise, and both singing and playing are excellent.

the boys voices for me are one of the main attractions to this new recording, a different timbre to the grown-ups on Konrad Junghänel’s Deutsche harmonia mundi recording, which is slightly better integrated as a performance but the sense of space, the forces spread around a huge acoustic, the syncopated rhythms in that opening Kyrie and the sheer impact of the climax makes this new one really enjoyable.