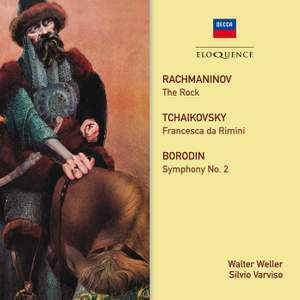 Varviso’s Latin temperament and opera training make for a plastic style in the phrasing … The slow movement [of the Borodin] is warmly done, and the finale is amiable — Gramophone Magazine, July 1968 More…

Borodin: Symphony No. 2 in B minor

Two of the works on this collection were inspired by literary sources. Tchaikovsky was an assiduous reader, and it is not surprising that so many of his works had literary origins. In the case of Francesca da Rimini, a reading of Dante’s Inferno was sufficient to convince him that here was worthy material for a symphonic poem, and he completed it in a matter of weeks during the autumn of 1876. Rachmaninov’s The Rock (also known as ‘The Crag’) was inspired by the eponymous poem by Mikhail Lermontov (‘The little golden cloud slept through the night / On the breast of the giant rock’) but even more by a short story by Anton Chekhov (Along the Way). Borodin put Prince Igor aside to compose his Symphony No. 2, and although it is less than 30 minutes long, it took Borodin the better part of six years, starting in 1871, to compose it. It was premiered in February 1877 in St. Petersburg, and remains the most popular of his three symphonies. The rare Varviso recording of it, and its coupling Francesca da Rimini, receive their first release on CD.

Varviso’s Latin temperament and opera training make for a plastic style in the phrasing … The slow movement [of the Borodin] is warmly done, and the finale is amiable