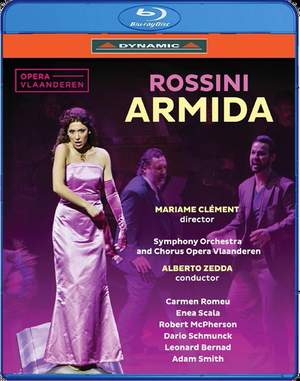 Antwerp's Opera Vlaanderen continues its Rossini opera cycle with this production of his rarely performed Armida, conducted by Alberto Zedda. The work features no less than four tenors in the leading roles, taken here by the commanding voices of Enea Scala, Robert McPherson, Dario Schmunck and the young rising star, Adam Smith.

Stage director Mariame Clément teams up once more for Opera Vlaanderen with set designer Julia Hansen, building on their successful production of Cavalli's Il Giasone, which was also released on the Dynamic label (CDS663). Here they take a critical look at the world of the Crusades. Clément sees Armida as the incarnation of the magical concept of ‘love’, for which noble and heroic knightly ideals are cast aside, turning love into a destructive frenzy.