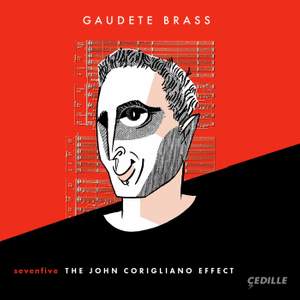 IV. City of the Big Shoulders

Winslow: The Record of a Lost Tribe

Gaudete Brass, a quintet devoted to presenting serious brass chamber music and commissioning new work,brings a fresh perspective to music of John Corigliano with an inventive album of brass works by the prolificAmerican composer and his protégés.

“The excellent Gaudete Brass” (Gramophone) honors Corigliano, winner of Grammy Awards, an AcademyAward, and a Pulitzer Prize, with world-premiere recordings of his groundbreaking Fanfares to Music foron- and off-stage brass choirs, his stately Antiphon for double brass quintet, and a new arrangement of theRossini-esque Overture from his popular Gazebo Dances.

Gaudete commissioned the title track, Steven Bryant’s sevenfive, in honor of Corigliano’s 75th birthday, and the numbers seven and five figure prominently in its musical architecture. David Sampson’s boisterous Entranceopens the program, while his surprisingly restrained Still is luxuriously lyrical. Jonathan Newman’s Prayers ofSteel evokes the Midwest landscapes in Carl Sandburg’s poetry. Jeremy Howard Beck’s ROAR exploits thebrasses’ ability to do just that. Conrad Winslow’s The Record of a Lost Tribe summons an imaginary, bygonecivilization. All except Entrance receive their world-premiere recordings on the album.

The Chicago-based quintet made its Cedille Records debut with the critically acclaimed Chicago Moves(2012). Gramophone praised the quintet’s “gleaming virtuosity,” Time Out Chicago its “sumptuous and lucid”delivery. England’s Hi-Fi News and Record Review found the album “stimulating and very engaging,” whileClassicsToday.com called it “a really smart, enjoyable release.” A review in the Journal of the Society ofAmerican Music proclaimed, “Gaudete Brass’s presentation of challenging contemporary music demonstratestheir technical mastery and ensemble blend and establishes them as a group of chamber musicians to keepan eye (and ear) on.”

Gaudete Brass has performed at New York’s Merkin Hall and Symphony Space and Chicago’s MillenniumPark, and given concerts and presentations at The Juilliard School, Eastman School of Music, and Vanderbilt University.