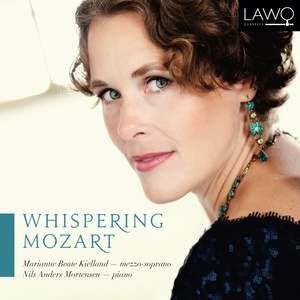 When the development of classical song as an art form is considered, Mozart must be seen as one of the pioneers. It was he who elevated the song from domestic and traditional music to the realm of serious music. And with Mozart we have the entire spectrum of what a song can be.

This recording presents mezzo-soprano Marianne Beate Kielland who is one of Norway’s most eminent singers. She performs regularly with leading orchestras and conductors in Europe and Japan, and with over 40 recordings – on BIS, Avie, Chandos, Simax, Alpha, AliaVox, Vivat, Glossa, Harmonia Mundi and others – has distinguished herself in the international recording market. With his many concerts and recordings, Nils Anders Mortensen has established himself as one of Norway’s leading pianists. He is employed as a state musician in Finnmark County, but actively freelances as well.