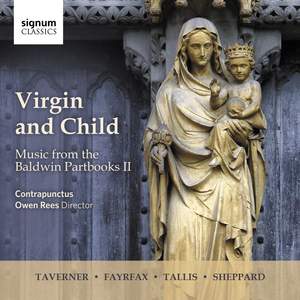 Music from the Baldwin Partbooks II

the consort’s blend is natural rather than rigidly smooth, with beautiful transparency from the altos, a sonorous bass-line and a steady, secure pulse. The impression is of wandering through... — BBC Music Magazine, May 2017, 5 out of 5 stars More…

Early music consort Contrapunctus return to disc on Signum for the second release in their series centred on music of the Baldwin Partbooks (In the Midst of Life, SIGCD408). John Baldwin was a member of the choir of St George’s chapel, Windsor, and his transcriptions during the 1570s and 80s create one of the greatest surviving collections of Marian polyphony, composed during the reigns of Henry VIII and Mary Tudor. This volume explores texts celebrating Mary as mother of God, and on the Virgin and her Child.

Contrapunctus, led by Owen Rees, couple powerful interpretations with pioneering scholarship. Currently Vocal Consort in Residence at Oxford University, the ensemble’s first two recordings, Libera nos and In the Midst of Life, were both shortlisted for the Gramophone Early Music Award.

A contemporary of Mundy, Robert White (c1538-1574) was a promising young musician whose life was cut short by a plague epidemic in London. His colleague Robert Dow, who made a personal copy of White’s motets, left an epitaph for him in the manuscript: ‘Greatest glory of our muses, White: you perish, but your muse remains for ever’. Like Mundy, White also set ‘Tota pulchra es’, a colourful text that was traditionally applied to the Virgin Mary. And like Mundy’s Vox Patris caelestis, this piece shows the most unrestrained side of English devotion to the Virgin Mary—and perhaps also to her royal namesake. White’s setting is for six voices in a rather backward-looking style, with the plainsong melody always present in the baritone part and a relatively wide vocal range (F-g’’). The effect is expansive and lyrical, in contrast with the denser texture and continuous points of imitation that feature so prominently in many of White’s psalm-motets.

the consort’s blend is natural rather than rigidly smooth, with beautiful transparency from the altos, a sonorous bass-line and a steady, secure pulse. The impression is of wandering through a sequence of chapels, some tall and dazzlingly bright…some strikingly dark and heavy

Elder’s performance has a special, spacious inevitability about it.

If it’s the Baldwin Partbooks you want to explore, this second volume from Contrapunctus is a fine option