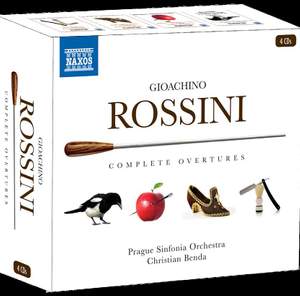 Rossini’s musical wit and zest for comic characterisation have enriched the operatic repertoire immeasurably, and his overtures distil these qualities into works of colourful orchestration, bravura and charm. From his most popular, such as La scala di seta (The Silken Ladder) and La gazza ladra (The Thieving Magpie), to the rarity Matilde of Shabran, the full force of Rossini’s dramatic power is revealed in these masterpieces of invention.

Each of the four discs in this set has received outstanding international acclaim, with Volume 2 described as “an unalloyed winner” by ClassicsToday, and the Prague Sinfonia Orchestra’s playing described as “stunning” by American Record Guide (Volume 3).