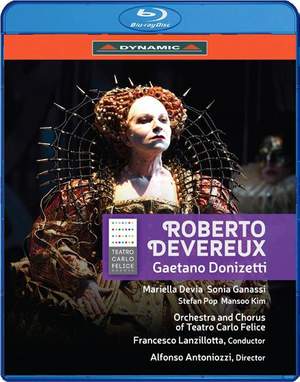 Orchestra and Chorus of The Teatro Carlo Felice,...

Without the distractions of Regietheater or intrusive producer concepts, this performance and staging gets to the heart of Donizetti’s last Elizabethan opera. — MusicWeb International, 21st February 2017

Donizetti composed Roberto Devereux during a period of intense creativity. The work had an uninterrupted 10-year run after its première in 1837, before going on to enjoy international success throughout Europe and in the Americas, with versions in French, German, Russian and Hungarian. When Donizetti moved to Paris in 1838, he furnished the opera with the overture that paraphrases the British anthem God Save the Queen. The Queen dominates from her very first appearance, a true protagonist, performed here by the great Mariella Devia: her pure voice, impeccable intonation and great stage presence, all combined with the technical qualities of her voice, led to an extended standing ovation. It was a triumph, too, for Sonia Ganassi (Sarah) and the tenor Stefan Pop (Devereux).

Available also in DVD and Blu-ray with subtitles in Italian, English, German, French, Japanese and Korean.

Orchestra and Chorus of The Teatro Carlo Felice, Francesco Lanzillotta

Without the distractions of Regietheater or intrusive producer concepts, this performance and staging gets to the heart of Donizetti’s last Elizabethan opera.