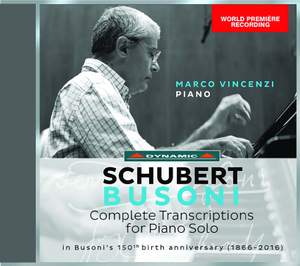 Schubert: Overture D 591 in C major 'in the Italian style'

Schubert: Overture D 590 in D major 'in the Italian style'

The Italian pianist Marco Vincenzi, director of the “Centro Studi Musicali Ferruccio Busoni” in Italy, gives an impressive interpretation of these Schubert works, transcribed by Busoni and never previously recorded. We are treated to all of Busoni’s Schubert transcriptions on a single CD. The music is delightful in itself, and masterfully arranged for piano by Ferruccio Busoni. These are some of the first transcriptions that Busoni made.

Born in Genoa, Marco Vincenzi is active in Italy, Austria, France, Germany, Great Britain, Holland, Romania, Spain, Switzerland and the United States, and has appeared in recitals and performances with orchestra at some of the most important European concert halls. A professor of piano at the Conservatory of Genoa, he has recorded eight monograph CDs (Lipatti, Wolf-Ferrari, Busoni, Pizzetti, Rota, Vieuxtemps, Respighi and Mozart-Busoni), all for Dynamic and all favourably reviewed by the most important European and American music magazines. In 2012 he also recorded a Mozart CD for Naxos.