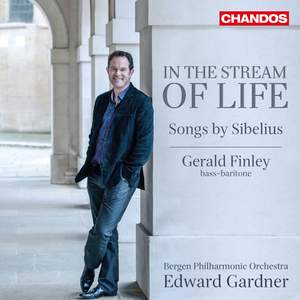 The exceptional collaboration and friendship between the late Einojuhani Rautavaara and the internationally acclaimed bass-baritone Gerald Finley culminates in this unique album of orchestral songs by Sibelius, on which the Bergen Philharmonic Orchestra is conducted by Edward Gardner.

The album offers orchestrations, by Sibelius and others, of songs which Sibelius originally wrote for voice and piano, and includes the premiere recording of In the Stream of Life, seven songs orchestrated by Rautavaara for his friend. Throughout, the poetry perfectly reflects the instinctively felt relation between Finnish nature and Sibelius’s music.

As Finley reveals: ‘the recording of [In the Stream of Life] became a very personal project when the sessions took place only a few weeks after [Rautavaara’s] death, in the same week as his funeral... and I am so thankful that a final addition was made possible when in the last months of his life [Rautavaara] agreed to orchestrate “Hjärtats morgon” and include it in the group.’

An impressive if idiosyncratic programme

A disc of songs and orchestral works for all devotees of Sibelius.

Rautavaara's orchestrations are so convincingly Sibelian that on first hearing I completely forgot I wasn't listening to the The Real Thing...Finley is in magnificent voice throughout: though it's relatively uncommon to find non-Finnish singers tackling this repertoire, he seems completely at home with both the sound-world and the texts.

This haunting disc is as much a tribute to the Canadian singer’s close friendship with the late Finnish composer Einojuhani Rautavaara as it is a declaration of love for Sibelius’s songs...Dark and brooding, they are a fitting memorial.

Finley sings them all with his usual finesse and careful shading, reserving his full power for the few genuinely climactic moments...The subtle, respectful orchestrations wrap around his voice like a glove...Gardner and his orchestra include very fine performances of three orchestral works.

these new versions perfectly capture and amplify the spirit of Sibelius’s songs. Gerald Finley, a close friend of Rautavaara, makes an ideal case for the new settings, and his approach to the Swedish language of the texts is flowing and lyrical.