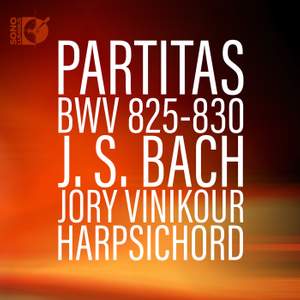 An utterly absorbing set that discloses something new at each encounter — BBC Music Magazine, March 2017, 4 out of 5 stars More…

The six partitas for harpsichord by Johann Sebastian Bach are among the greatest and most inspired works of all keyboard literature. Although they are the first works that Bach decided to publish, they represent the composer's genius at the height of his maturity, matched only by the Goldberg Variations. Performed on a stunning copy of a North German instrument of Bach's time, rich and expressive, but also clear and incisive, built by Tom and Barbara Wolf, each of the partitas is a microcosm, ranging from the poetic and pastoral (no. 1, in B flat Major), to the epic and tragic (no. 6, in e minor). Bach shows himself to be playful, profound, meditative, theatrical, virtuoso - and always the greatest composer of counterpoint of all time.

The six partitas represent the apotheosis not only of Bach's unique keyboard language, and the expressive possibilities of the harpsichord, but in the inherent range of colors and contrasts within the confines of a suite.

To a greater extent than in the other sets of suites, each of the six partitas seems to establish its own distinct character, which is developed throughout the suite. As with the English Suites, each of the partitas opens with a prélude. However, these movements are widely varied in form as well as in mood. Although each of the the six partitas contains the standard suite movements (apart from the c minor partita, which foregoes the customary gigue in favor of a Capriccio), these movements show the most striking variety.

His debut recording for Sono Luminus, The Complete Harpsichord Works of Jean-Philippe Rameau (DSL92154), was nominated for a GRAMMY® award, in the category of Best Classical Solo Instrumental Recording in 2013. His follow-up recording, Toccatas: Modern American Music for Harpsichord received the same honor two years later.

An utterly absorbing set that discloses something new at each encounter

This recording may not be a first choice, but it is safe and steady one which presents the music well but without a flourish.