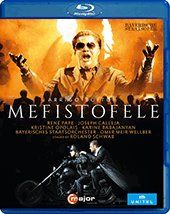 Pape revels in the grotesque vocal grandeuer of his suited and booted Mefistofle , with Joseph Calleja offering a thoughtful, sweet-toned Faust, painfully aware of the wrong turs he takes on... — BBC Music Magazine, March 2017, 3 out of 5 stars/4 out of 5 stars More…

Best-known today as the librettist of Verdi’s final Shakespearean masterpieces, Otello and Falstaff, the multitalented Arrigo Boito was also a fine composer in his own right. Hugely ambitious in scope, and some 20 years in the making, his first (and only completed) opera, Mefistofele, sets out to encompass nothing less than the whole of Goethe’s vast poetic drama Faust (part I and II), and is considered the very central work of his phase between Verdi and Puccini.

Pape revels in the grotesque vocal grandeuer of his suited and booted Mefistofle , with Joseph Calleja offering a thoughtful, sweet-toned Faust, painfully aware of the wrong turs he takes on his road to eventual salvation.

René Pape’s Mefistofele is restrained and autocratic…Calleja is also far less camp than has become the norm for Faust, to the opera’s benefit. Both men are in seriously good voice. As is Opolais, who lavishes no small weight of tone on the part…this release is a good first calling post for Boito’s drama

Omer Meir Wellber conducts a thinking man’s version of the score, and René Pape matches him as a sardonic, measured protagonist. Joseph Calleja is at his stylish best as Faust, Kristine Opolais is dramatically convincing but vocally scratchy as Margherita.