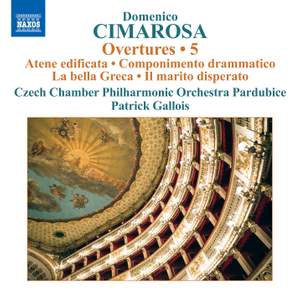 Cimarosa: I due supposti conti, Overture

Domenico Cimarosa was one of the last great exponents of the ‘Neapolitan School’ and one of the most famous and successful composers before the arrival of Rossini on the European opera scene. His works were produced and re-staged at innumerable performances in opera houses all over Europe. This programme represents the extraordinary range of Cimarosa’s career, from Le trame deluse (The Foiled Schemes) and La villana riconosciuta (The Country Girl Revealed), which were among his greatest hits, to overtures from cantatas such as Atene edificata (The Founding of Athens) and the ‘dramatic composition’ for Cardinal de Bernis, written on the occasion of the birth of the Dauphin, the firstborn son of Louis XVI.