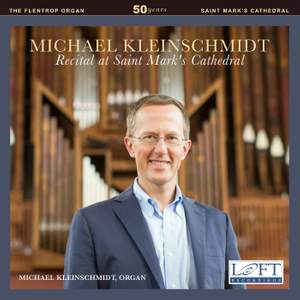 The Emperor's Fanfare (arr. for organ)

Michael Kleinschmidt plays his first recital on the Flentrop organ at Saint Mark’s Cathedral. Taking inspiration from the inaugural recital programs by E. Power Biggs fifty years earlier, Kleinschmidt includes works by Sweelinck and Bach played in those first concerts. + As a concert organist, Michael has performed in forty states in the US, and in Canada, England, Europe, and Japan. As a choral conductor, he has served as guest conductor for summer choir courses of the Royal School of Church Music/America in Missouri, North Carolina, and Oklahoma, and for diocesan youth choir festivals in Massachusetts and Rhode Island. + “…a compelling and creative musician…” (The Oregonian)