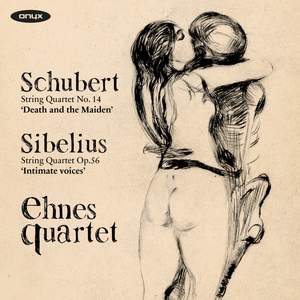 The Ehnes Quartet favour rhythmic buoyancy, athletic grace and crisp, clear lines for Schubert’s Death and the Maiden Quartet. Speeds are lithe, but not especially fast, and while it may be clean... — BBC Music Magazine, February 2017, 4 out of 5 stars More…

Death preyed heavily on the minds of both Schubert and Sibelius when they were composing the two string quartets on this new CD from the Ehnes Quartet. Sibelius had undergone several operations to remove a tumour in his throat. The bleak and highly personal 4th Symphony is the masterwork from this period, but the string quartet ‘Intimate Voices’ of 1908 should not be underestimated. Taut and highly concentrated, it has an almost Haydnesque construction, and the quartet’s first movement’s sheer perfection of form approaches that of the 3rd Symphony’s opening movement. "I am the most unhappy and wretched creature in the world…whose health will never be right again" wrote Schubert to a friend in 1824. With his emotions veering from happy memories of earlier years to shuddering terror at the prospect of death, he composed two string quartets and the Octet over a two- month period. The D minor quartet makes ingenious use of his earlier song ‘Death and the Maiden’ from 1817 in the slow movement’s variations. ‘Give me your hand, you fair and gentle creature; I am a friend and do not come to punish’ sings Death soothingly. The music captures Schubert’s fearful state of mind in a remarkable ‘freeze frame’ effect.

The Ehnes Quartet favour rhythmic buoyancy, athletic grace and crisp, clear lines for Schubert’s Death and the Maiden Quartet. Speeds are lithe, but not especially fast, and while it may be clean it’s not hygienic – there’s plenty of colour and variety of attack … this performance compels.

[the Schubert is] anguished, yes, but in place of rough-edged abandon we get a razor-sharp, perfectly blended precision that verily slices through the air…[the] Sibelius tells a similar story of deep soul painted with a panoply of colours, dynamics and emotion, with a natural dramatic flow throughout. I never would have thought of putting these two works together, but in this group’s hands it has resulted in something wonderful.

From the opening chord, firm, precise, pliant, this quartet knows its collective mind when it comes to Schubert’s much loved “Death and the Maiden”...They avoid exaggerating the Viennese lilt, keeping all light, muscular and buoyant.

The Ehnes Quartet's shared philosophy of sound and blend, plus its unanimity of pacing and purpose, especially beguile the ear in its interpretations of these soul-searching works.