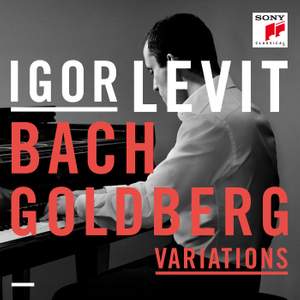 The [Goldberg] Aria sings without affectation as if to emphasise that what follows isn't about the theme but what happens to it. — BBC Music Magazine, January 2016, 5 out of 5 stars More…

Igor Levit’s album “Bach, Beethoven, Rzewski” (Sony Classical) won the acclaimed ‘Recording of the Year’ at the Gramophone Awards 2016. Now, Sony Classical brings these three major works, Bach's Goldberg Variations, Beethoven's Diabelli Variations, and Frederic Rzewski's Variations on "The People United Will Never Be Defeated” separately on one disc. Levit comes with great pedigree when it comes to recording the works of J.S. Bach as he recorded Bach’s Six Partitas (which won Gramophone recording on the month) in 2014 before embarking on this project.

The [Goldberg] Aria sings without affectation as if to emphasise that what follows isn't about the theme but what happens to it.

his variety of touch and colours here is such that after the first four variations I found myself checking the booklet to make sure that there wasn't more than one instrument involved: there are sections which sound almost fortepiano-like in their clarity...The sense of catharsis when the aria returns at the close was, for me, more tangible than in any other performance I've experienced.

Levit moves between Glenn Gould-like velocity, a sharp sense of period style and a delicacy of nuance and pedalling that evokes a different sort of tradition.