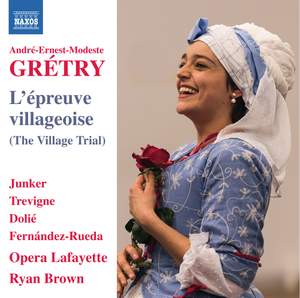 It is all delightfully done by Opera Lafayette — Gramophone Magazine, February 2017 More…

L’épreuve villageoise (The Village Trial) – which, in its original form as Théodore et Paulin, was first performed before Marie Antoinette at Versailles – was one of André-Ernest-Modeste Grétry’s most popular works. For a century after its 1784 première it enjoyed huge acclaim across Europe and even travelled to the New World, where it captivated audiences in New York. Grétry was a master of eighteenth-century opéra comique and this crisp and lively farce centres on a clever farmer’s daughter and her two competing suitors. Employing divergent stylistic registers – finesse and naiveté, music reminiscent of popular song, and extended ensembles – Grétry fashioned a score of sophisticated wit and huge charm.

It is all delightfully done by Opera Lafayette