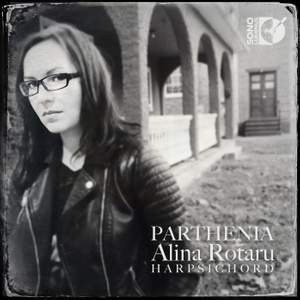 Byrd: Pavan & 2 Galliards in A Minor "Earl of Salisbury"

Bull, J: Galliard to the Pavan

Gibbons, O: Fantasia a 4 for the viols

Unlike all my other projects, Parthenia captured my interest long before having the opportunity to discover the high quality of its music. The wedding between Elizabeth Stuart and Frederick V, which was only the beginning of a happy love story, could not have deserved a better documentation than this excellent collection of harpsichord works. While navigating through this intriguing and wonderful world of Parthenia’s music, I carried the young princess in my head and in my heart, imagining her experiencing with great intensity and grace all sorts of feelings, from the exuberance of the galliards to the deepest melancholy of the pavans. She loved Frederick, but had to separate in her heart from her mother. She had to leave her homeland but was sure to find her home in her husband. So far, Parthenia is the most romantic repertoire I had the opportunity to work on, and it does not cease to amaze me. Alina Rotaru

Parthenia, or the Maydenhead of the first musicke that was ever printed for the Virginalls is perhaps the most important early publication of English keyboard music. It was first published either late 1612 or early 1613 and, as its title indicates, was the first printed collection of keyboard music to appear in England. The “mastermind” behind Parthenia was the engraver William Hole, who conceived it as a wedding gift to Princess Elizabeth Stuart (the second child and eldest daughter of James VI and I) and Frederick V, Elector Palatine of the Rhine. The extravagant wedding, whose costs almost bankrupted King James, took place on Valentine’s Day, February 14, 1613; stage plays, musical performances, mock naval battles on the Thames, and fireworks were included in the festivities accompanying the ceremony.

The original dedication to Parthenia contains a somewhat cryptic passage that singles out the “neighbour letters E and F, the vowell that makes so sweet a Consonãt, Her notes so linkt and wedded together seeme liuely Hierogliphicks of the harmony of mariage…” The author has linked these two letters together because they represent the royal couple: “E” refers to Elizabeth Stuart, and “F” to Frederick. This symbolic association musically comes to life in Gibbons’ “The Queen’s Command,” where the two “liuely Hierogliphicks” take on the guise of the pitches E and F. These two pitches play a central role in the piece: they are the two opening notes, and each section begins alternately on either E or F. After this musical reenactment of the union of Elizabeth Stuart and Frederick, the final prelude bursts in joyous celebration through a stream of exuberant figurations and cascading scalar passages.

Excellent - a disc that celebrates extremely well the four hundredth anniversary of the first printed keyboard music in Europe.