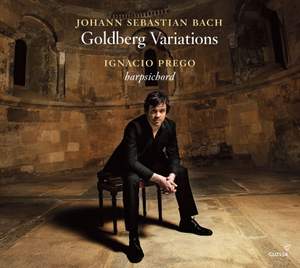 Ignacio Prego is a leading member of the rising generation of Spanish early music specialists recording for Glossa such as Fahmi Alqhai and Josetxu Obregón. Prego has a busy concert schedule across Europe, the US and Asia, and is frequently to be heard performing harpsichord concertos with ensembles such as the The English Concert, collaborating with eminent musicians such as Monica Huggett and Nicholas McGegan, or giving solo harpsichord recitals, where he is able to demonstrate his special preference for the works of J.S. Bach. This new recording of Bach's 'Goldberg Variations' represents Prego’s third solo CD but his first for Glossa. Heard playing a splendid copy of a 1738 Christian Vater harpsichord on this Federico Prieto-engineered recording, Ignacio Prego illustrates perfectly the points put forward in scholar David Schulenberg’s essay for the booklet, in which particular emphasis is placed on Bach’s threefold cycling of the 30 variations, each time combining one free variation, one duet and a canon. Fine photographs from Noah Shaye round up a new inspiring Glossa title. The release of this recording will precede various international performances from Prego, including two US tours, first in November 2016 and then in March 2017, at venues such as the Benaroya Hall in Seattle and the National Gallery of Art in Washington DC.