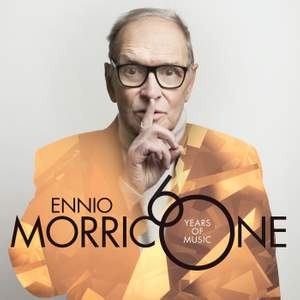 Morricone, E: On Earth As It Is In Heaven

Morricone, E: The Man With The Harmonica

Morricone, E: A Fistful of Dynamite

Morricone, E: The Ecstasy of Gold

Morricone 60’ is the first album of Ennio Morricone’s greatest hits conducted, recorded and curated by Morricone himself.

It sees the celebrated Maestro performing some of his greatest film music from The Good, the Bad and the Ugly to his recent Academy Award-winning score for Quentin Tarantino’s The Hateful Eight. The album marks Ennio Morricone’s 60th anniversary as a composer and conductor and features brand new recordings with the Czech National Symphony Orchestra, with whom he’s collaborated on major international movie scores.

Ennio Morricone has composed over 500 scores for cinema and television as well as over 100 original musical works and is one of only two film composers in history to have received the honorary Academy Award for his lifetime achievement. Highlights include his scores for Once Upon a Time in the West, One Upon a time in America, A Fistful of Dollars, The Untouchables and The Mission. Morricone’s score for The Good, The Bad and The Ugly holds the number two position in the Top 200 ranking of best film soundtracks ever composed.